The Fisheries Secretariat provides below our summary after The International Council for the Exploration of the Sea (ICES) released its scientific advice for Baltic Sea stocks yesterday, 31 May.

The western Baltic cod stock has not improved as expected last year and ICES advises a dramatic cut in total catch for this stock. With a revised assessment, ICES is able to advise an increase in total catch of sprat of over 50%.

Both Eastern and Western stocks of Baltic Sea cod have shown few positive signs of development in the last year. For western Baltic cod, recruitment of individual fish to the fishable stock was the lowest since records began in 1994. The stock is still below all biomass reference points and suffers a fishing mortality well above sustainable levels. The larger eastern Baltic stock, close to collapse in 2002, showed signs of recovery a few years ago but the stock status now is uncertain and assumed to be declining.

The bulk of Baltic herring stocks are relatively stable in recent years and are above all biomass reference points except for herring stocks Bothnian Bay and the Gulf of Riga.

The sprat stock shows marked improvement with changes to how ICES assessed the stock, better representing natural mortality from eastern Baltic cod. Fishing mortality on sprat is still above a sustainable level, but only just, with a marked decrease from 2013.

For salmon, the advice is similar to last year. Flatfishes in the Baltic seem to be on the increase and ICES advices an increase for plaice, the only Baltic flatfish species under EU quota management.

All catches of plaice in the Baltic come under the landing obligation as of 1 January 2017, thus all catch should be landed. As for most stocks, ICES advises a total commercial catch for 2017, which is independent of management area overlaps or third country fishing effort. The corresponding plaice quota for 2017 would include catch previously discarded, and adjustments due to a management area overlap between the Baltic and Kattegat for plaice in subdivisions 21-23.

The Fisheries Secretariat has produced a summary of the ICES advice which you can find in the pdf, including details about each of the stocks listed in the table below.

This table appears on page 3 of our advice summary and provides the ICES advice for total commercial catch across the Baltic fish stocks, the % difference from ICES advice for 2016, and the 2017 quota corresponding to ICES advice. The total catch for salmon is represented by a total count of individual fish. 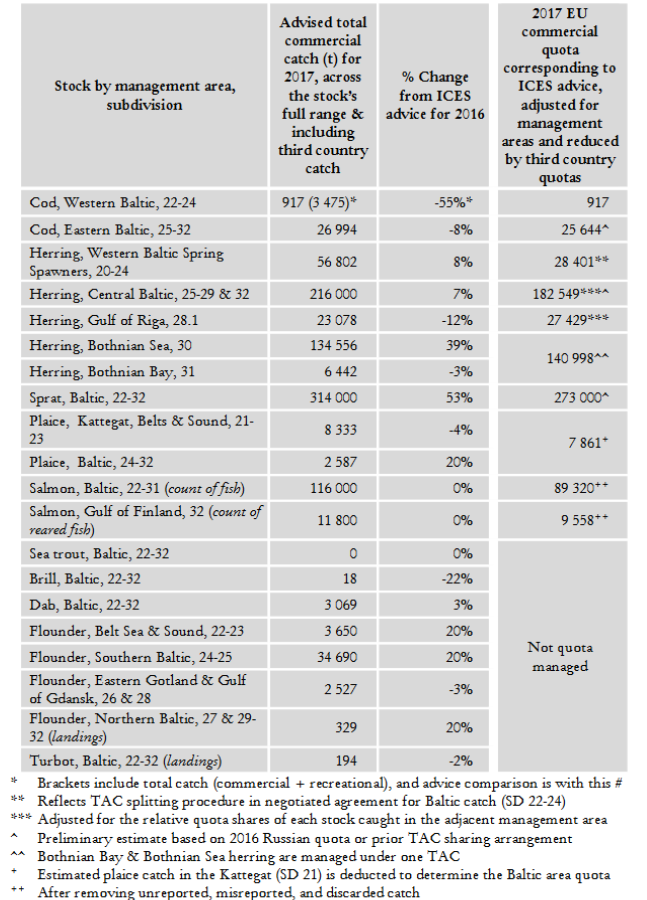